Sir John Herschel is my hero.  In 1839, the same year as the invention of the Daguerreotype, he coined the word "photography" and the photographic terms "positive" and "negative", invented the use of sodium thiosulfate (hyposulfite of soda as it known at the time, or hypo as I grew up with it) as a photographic "fixer", and made the first glass photographic negative.  During 1833–1838 he made a trek to Southern Africa to complete the panoramic survey of astronomical nebulae, a survey his father William Herschel had done well already for the northern hemisphere.  To celebrate his panoramic and photographic contributions, I proposed the name Herschel for the new Street View camera that replaces the one I helped design and build 10 years ago – and the team adopted it. 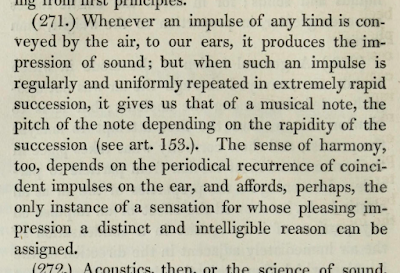 In his 1830 Preliminary Discourse on the Study of Natural Philosophy, Herschel had written on all aspects of science, including the bit on a time-domain explanation of harmony that I quoted in the book.

So I'm bummed that I somehow misspelled his name, and that my BibTeX file had the wrong century for the source (see the errata post).  The printed book has both 1831 and 1830 in its front pages; either one would have better than the 1930 that I used.  These errors are still there in my free 2018 corrected author's draft.  Apologies to Herschel.  Hopefully we'll get to a second printing and get this fixed.

Dick Lyon
As a Principal Research Scientist at Google, I have had the opportunity to apply my long-time interest in hearing to many challenging problems in "sound understanding". Besides supporting these applications, Google has supported my creation of new-and-improved versions of auditory sound analysis methods as open-source code, and has also supported my writing of a book about the approach and details.
With the book finally finished, after seven years of work, I've started this blog at machinehearing.org as a place to get the machine hearing community involved in keeping the information correct and accessible.